In honor of the love month... 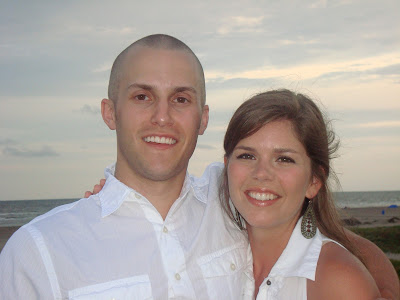 My husband's top 10 most romantic moves:
(in no particular order)

Let me preface this by saying that Will and I started dating in highschool when he was 15 and I was 16 so some of this came out of a beautiful budding highschool romance. :)

10. He went on summer vacation to Destin, FL with his family and searched all week for sand dollars on the beach so he could bring me home a basketful of sand dollars.

9. He knows that I love the chocolate/banana combination so for Valentine's Day he made me (not bought) chocolate covered bananas.  He was so proud of the work he had put into making those.  You can't fully appreciate it unless you saw them with your own eyes.  I don't think he thought to cut them up and and then dip them.  They were whole bananas on sticks dipped in chocolate.  So stinkin' hilarious.  And very thoughtful.

8.  He quit biting his nails in highschool because I thought it was gross.  He bites them again now.  I guess he knows I'm not going anywhere.

7.  One year for Christmas he set up a scavenger hunt for me all over my house (This was in highschool so he had put everything together and then given it to my mom to set up).  The final clue sent me outside to my 86 Maxima where he had zebra seat covers that I had been dying to get.  Remember, highschool.  I loved those seat covers...

6.  We broke up after highschool and stayed apart for most of the first semester of college.  He learned to play guitar in college to woo me back.  That's why I think he learned to play anyway.

5.  Marriage proposal in Prague, Czech Republic.  We had been studying overseas in Greece all summer and then at the end we back-packed for 3 weeks.  Half-way through back-packing he busts out a diamond ring that he had been carrying around in a sock in the bottom of his back-pack!  I had no clue.  We had never even looked at rings!

4.  He gave me a Bible with my new name on it on our honeymoon.

3.  For one of my birthdays in medical school he had taken me out on a date, and when we got home there were candles lit everywhere and one of my favorite desserts (creme brulee) on the table.  He had gotten his brother to help him set everything up while we were out.

2.  For our 5th anniversary we took a two day trip to Disney World.  He was already going to be in Florida for a residency interview so I went with him.  The first night at Disney he had planned a hot date - steak dinner and Cirque du Soleil.  Afterwards at the hotel, I discovered rose petals strewn all over the room and in a heart shape on the bed.  It was such a Bachelor move.  It was supposed to get me in the mood but it gave me the giggles. 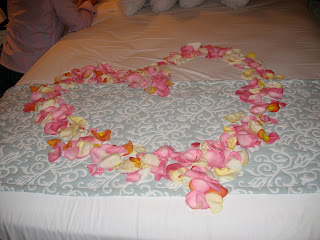 1. And I've got to give him props because even with the killer job he has, he's still bustin' out some romantic moves.  We went to the Brad Paisley concert in St. Paul three weeks ago to celebrate our 8th anniversary.  The concert was amazing and when we got back to the hotel there was wine and chocolate-covered strawberries waiting in the room.

I hope you haven't read this and gagged all the way through.  Fun to think back on all the history we've had together.  And he doesn't get bragged on enough so this should cover it for a while.

Five years of dating, 8 years of marriage, 2 bachelors degrees, 3 kids, 3 cities, 7 years and counting of medical school/training and still keeping the love alive!!  Praise God!  I pray for His protection over our marriage and our love for each other in the years to come.
Posted by a copeland story at 6:40 PM

a copeland story
Our family of 9 is serving at Tenwek Hospital in Bomet, Kenya. We want this blog to be a way for friends and family to keep up with us and the work here at Tenwek. 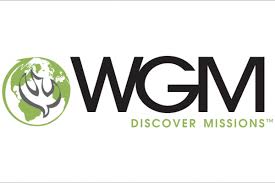 Click above to partner with the Copelands in their work at Tenwek Hospital. 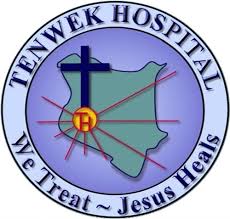 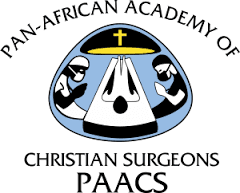 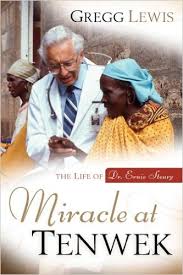